.. even if they didn't read it properly. The estimate of 12% of men being behaviourally bisexual – that is, being sexual with more than one gender – is informed largely by a 1982 survey of Playboy readers in the US[1]Unlike most other large surveys done for magazines, it looks like all of the over 60,000 responses from men were actually analysed! and..

The "in the last five years" came from the predictions of the person who commissioned it that they'd find hardly any bisexual men and so they needed to make the criteria for being included fairly broad. In fact, it turned out that the average number of partners was three men and three women per year.[2]The people who did the research were struck that the average number of partners per year for gay men in their other surveys was also six.

The article was prompted by an episode on bisexuality that was part of Channel 4's Seven Sins series, entitled 'Greed', sigh.

'Greedy' is the latest slang for bisexual. Hester Lacey reports from a scene which pities 'monosexuals' and revels in cake and eatism

BISEXUALS have always been a notoriously discreet group; but not the exuberantly voluptuous Felicity Diamond, all long dark hair, flashing eyes and throaty voice. Felicity considers herself a bisexual "greedy". She fronts the episode on greed in Channel Four's Seven Sins series, talking not about gluttony, but about bisexuality, in a programme that mixes the imagery of food with that of sex.

Greedies, says Felicity, are hungry for sensuality. "It's not about greed for a number of partners. I want the best, not the most – I'm very, very selective. It's a lust for life rather than a generalised lusting – an intelligent form of greed. I have lots of friendships and good relationships and sometimes they may become sexual. When I like people I don't care what genitals they have."

Felicity, 33, is a professional cook and masseuse. The Islington flat she shares with kittens Special Baby Doll, Squeaky Tiger and Precious Minx Bear, smells wonderfully of chicken breasts stuffed with pesto in the oven. "I really like people and I really like food. Pleasure and lusciousness and luxury are what I do."

Heterosexual sex, she says, has become "tired". "Since the advent of HIV, people have had to become much more explorative, and now sex is not just about penetration. Bisexualism is increasing among women simply because of dissatisfaction with men. The new man thing never really happened and when you want to find someone you can live with, talk to and get on with, often men don't always make the grade." Greedies, on the other hand, she says, make better partners. "Monosexuals haven't explored what their sexuality is all about. The bisexuals I know are much more discerning."

Being bisexual is also rather trendy. Roxi Lockwood, 26, an exotic dancer and techno-violinist who also appears in the programme, says, "Bisexuals do seem to be more to the fore at the moment. I'm not greedy in that I wouldn't have partners of both sexes at once: I'm a monogamous bisexual. It is a wider field of experience, though it can be a pain in the neck – your partner thinks you're looking at girls as well as boys."

Bisexuals have not, up to now, been very vocal. They tend to be mistrusted by both heterosexuals and homosexuals (who regard them as "traitors"). But it seems that there are a considerable number of this quiet minority. A 1995 report commissioned by the Health Education Authority, which concentrated solely on men, found that around 12 per cent of men are probably bisexual.

In her book Vice Versa,[3]It would be an excellent 200 page book.. but sadly it's just over 600 pages long. published last year, Marjorie Garber, professor of English at Harvard University, made an in-depth study of bisexuality, and identifies a growing trend among American college students to define themselves as bisexual (aka "switch-hitters" or "AC-DC"). Another new book is to be published shortly by Cassell. The Bisexual Imaginary: Representation, Identity and Desire is a collection of essays edited by members of Bi Academic Intervention, a network of teachers, publishers and researchers working on the subject. Merl Storr, lecturer in sociology at the University of East London and one of the book's editors, agrees that bisexuals have become more high-profile. She believes that this is partly because of the HIV epidemic. "Bisexual men were demonised as carriers of the disease to the general population," she says. "Lots of people felt targeted and felt they had to fight back and become active. Also, lesbian and gay communities have come of age, and there is now more space for people to explore the contradictions of bisexuality." She is ambivalent about the use of the term "greedy" to describe bisexuals.

But while greed is all very well for the glamorous and famous, others can find they are less well catered for. "You can talk about bisexual greediness if you like, but in that case I'm practically anorexic," says David, 29, a teacher from Birmingham. "Greed is fine if you live in London and have places to go and similar people to meet. There is still a lot of prejudice about and people seem to find it even harder to come to terms with bisexuality than with homosexuality."

Kate, 33, who works in publishing, also dislikes the term "greedy". "It comes from a heterosexist position that bisexuals are promiscuous," she says. "We get that reaction from gays as well – that we want the best of both worlds and are letting the side down. Bisexuality still tends to be hidden. When I have a relationship with a woman, I seem to have to come out all over again." She adds a belief that many bisexuals share: "Everyone has the potential to explore their sexuality in terms of the same sex – it's a shame more people don't feel they can."

Freud's theory, too, was that everyone is positioned on a sliding scale between heterosexuality and homosexuality. Greedy or not, perhaps there are a lot more like Brett Anderson of Suede, who said, "I'm a bisexual man who has never had a homosexual experience."

The List's preview of the programme: 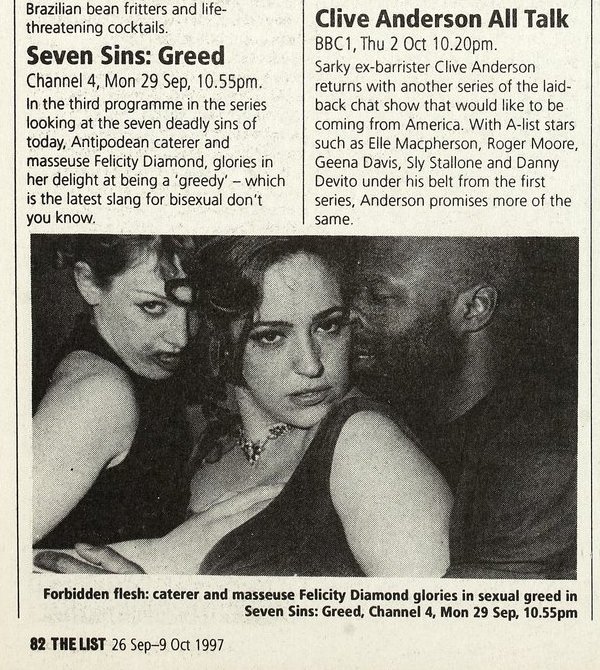 The Independent's review of the programme said:

[Part of another programme] raised the hair on the back of your neck.

As did Felicity Diamond, the central character in Greed (C4), though "hackles" might be a better term. The third of a series of films on the theme of the seven deadly sins, this was actually about bisexuality (on the rather tenuous basis that "greedy" is a slang term for a bisexual. Several of the bisexuals interviewed didn't seem to know this, which made you suspect the whole thing might be a fit up). Felicity was the star attraction, a voluptuous Australian with a very self-congratulatory line in sexual liberty ("most people aren't intelligent enough to be bisexual"). Many of those who appeared, but Felicity in particular, seemed terrified of being "boxed in", "categorised", "straight-jacketed" or "programmed". Indeed, they went on about this so much that they began to sound rather neurotic, as though their sense of themselves were so fragile that it wouldn't withstand the impact of a casual preconception. Relax, you thought after a while, nobody cares what you do in bed remotely as much as you do. "Mutual respect" is apparently important to Felicity, but only for those who wear the same extravagant uniform as she does. "I'd cull about 90 per cent of the population," she said at one point, "and I'd eradicate genetic problems like idiocy, racism and lack of understanding". This final solution would seem to include those debased souls who quite like getting dressed in suits and are perfectly happy in "monosexual" affairs. Lack of understanding is the only kind of response those weirdos deserve.

The Times review said: "Last night's sinner was Felicity Diamond, who purred at us for half an hour about how much she enjoyed bring greedy. As it happens. Diamond — who is a caterer and a masseuse — is just the sort of woman who might well request an extra pillow: she believes in enjoying all that life has to offer. But she still resents the assumption that all bisexuals are promiscuous, explaining that "that's one of the reasons they call us greedy".